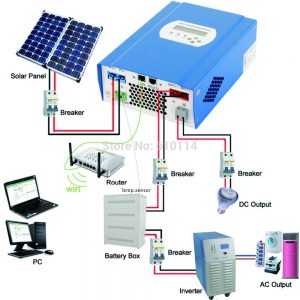 Solar panel is too small; it will not put out enough DC voltage to power the DC to AC inverter. You need to connect the Solar panel to a battery then battery to inverter.

Are solar Photovoltaic panels expensive to purchase & install? Can I self install or is this a pro job?

It is expensive if you just look at the price and say Wow! that is a lot of money. But when you compare it to renting electricity for the next 30 years and total the cost.. Well you end up making money.

You should find the package system you want which comes with instructions on how to install. Install the parts of the system you can and hire an electrician to run the wires and make the connections. You could save a great deal of money doing it that way.

Mounting the solar modules on the roof is by far the hardest part of the whole install. The inverter and charge controllers all have a Pos and a Neg markings and so does the solar modules making the wireing hookups easy. However to hook up to the utility you have to have a building inspector sign the paper showing he has inspected it. Catch 22 is you have to have an electrician sign the permit or the building inspector will not approve the system. If you install it wrong your home could be flaged as unsafe and you could end up being put out of your home till the wireing is brought up to code.

The easy way and the best way, Is to let the Solar electric dealer take care of it for you. The dealer is the one who has been trained and knows the electric building codes for solar electric your area.

Solar power coming to Redskins home field
The Washington Redskins are going solar. The team announced Wednesday that solar power panels will be in place at FedEx Field and in the stadium’s parking lot this September. The system will provide a portion of the stadium’s electricity on game days and all of its electricity on non-game days.
Space Solar Power Systems (SSPS)

Do People use LESS power at night, than during the day… so why not use solar PV connected to the grid?

With Solar PV the power company buys your excess power during the day, when they need it. and supplies you at night, when you use less. Often they pay more during peak times buying your power when your at work, and charge you lower rates at night when you’re at home.

Please tell me some advantages and disadvantages of using solar energy. Also need to know because it is a renewable resource. Can you also tell me how solar energy is and how long it will last. Thanks. [Tell me some websites you visit on this information]

First, everything is a guess, but the sun will continue to shine for another 2-4 million years. Therefore, for all practical purposes, their eternal. Solar energy depends on sunlight, the disadvantage is overcast, cloudy and rainy day in the snow, etc. No sun, no real energy. Another difficulty is the conversion of solar energy, solar panels generate direct current (DC) and this has to be converted to alternating current running applications, etc at home. To store solar energy, batteries are required, then the current energy Solar panels can recharge the batteries, then the DC must be converted into alternating current. Solar panels are not cheap, but the price is dropping. Also not last forever and can be damaged by hail, etc. The good news is that solar energy is clean, no pollution, except for panel fabrication and for the moment, the sun is still free.

Toys "R" Us, Inc. Announces Plans to install the largest North American solar power system on the roof of the Distribution Center … Toys "R" Us, Inc. today announced plans to add more coverage of the solar power installation in North America to its core distribution in Flanders, New Jersey. Phases the system is underway and construction will be completed this summer.
Solar electric system

how can the electric companies afford to put solar panels everywhere, but not on our houses?

it seems to me that we are just letting the power companies capitalize on a power source that really should be more accessable to us, the ones that have been paying for nuclear and other power sources that we can’t, by law, have installed on our property.

Keep in mind the issues of scale:

Solar panels on a commercial scale cost something on the order of $7.25/watt to install, of which roughly half of that is for the panel itself (retail). This includes inverter technology but not storage. This works out to about $7,250 per KW installed.

A 5,000 watt solar system on your house will cost approximately $35,000 to install. Cheaper per watt than commercial as there is no supporting infrastructure to build.

The differences between actual costs and what is paid by the end-user are subsidies provided by state and local governments and utilities.

So, if you are in an unsubsidized area, you are perfectly free to install solar power on your property – if you can afford it.

Now, if full life-cycle costs are included (installation, maintenance, cost-of-operation, and final disposal when done) nuclear and solar are also very close in cost. The difference is that a 480MW nuclear plant may be fit on about 660 acres of ground including cooling towers, access roads, set-backs and so forth – and could be set on less than 100 acres if necessary (many are).

The same capacity solar plant (at 10 watts per square-foot, peak power) would cover 11,000 acres or so, *not* including infra-structure, access roads, set-backs and so forth.

Solar power is a feel-good solution that is pretty impractical on the face of it *UNLESS* there is no alternative solution. But, because it is being subsidized by various sources, is highly visible and has all sorts of warm-and-fuzzy but generally thoughtless advocates it is popular beyond its worth.

We are actually considering it _because_ of the subsidies. But at face-cost nohownoway.

5 things you need to survive on the moon?

just crashed on the moon, and has to survive for seven days, the 15 elements, box would be your top 5 games of 50 feet of nylon rope, two .45 caliber pistols, self-inflating raft ten gallons of water a first aid kit fm transmitter-receiver solar Map Star 3100 pounds of battery powered portable oxygen tanks and parachutes concentrated solar a case of dehydrated milk compass magnetic signal list of call numbers of 1-5, with 1 being the most important

oxygen tanks for breathing in the water can not last a week without you star chart can say where the stars will position the FM transmitter to send a signal to a base of concentrated foods you eat can last long without it there is no compass because the moon has no magnetic field. games, they do not need oxygen, where there is no parachute moon.a why not? milk, since not only raft water.a, no. child first aid is important not to exceed even the fifth outbreak of chain pistol.a perhaps I am not heating unit sure.I I do not think you have to be at the top 5. and there you go

Because of the many benefits and environmentally friendly solar energy, many people are now turning their attention to the construction of solar energy systems.

Here, we focus on the construction of solar photovoltaic type and its various uses:

Construction photovoltaic solar energy system of the type of connection involves solar cells, to form a solar module two to four meters wide and 4.6 feet. Some of these modules similar to the old tiles. These modules form an interconnected network of solar photovoltaic energy, also called a solar panel.

This array is mounted on the roof of a building facing south at an angle. This is to ensure that the modules will receive a maximum amount of sunlight. Other material entering the system construction is the PV inverter. The inverter converts electricity from direct current (DC) to alternating current (AC). Through this role, you be able to use the energy generated by this system of standard devices of power electronics such as computers. You can also add the batteries as a emergency backup in case of power failure or a situation in which the PV system is not connected to power lines.

You can join photovoltaic systems in every way imaginable to use in your home or commercial buildings. In addition, the PV systems can be outside, for security lighting in parking lots, gardens and bus stops. Can also be used to operate all electrical systems as lights, cooling systems and appliances. However, by using photovoltaic systems, you should know that are adjusted according to your needs electricity and budget.

Building solar power systems of photovoltaic types are useful to light all types of appliances and also help to conserve energy .

What is the name of the solar energy company that invested in Google?

Google says it has invested in each company to buy some. I have heard say they buy computers and printers and key cards for use in your business. It makes me think that companies have invested in a team? I bet that even cars and trucks vans and maybe even the name in google them .. They should have invested in Chevy, Ford and other automakers as well. If solar installed in your building, not purchased in a solar energy company.